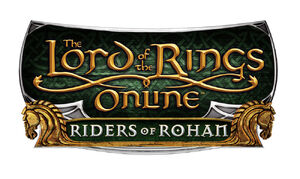 Riders of Rohan is the fourth expansion pack for The Lord of the Rings Online game. The biggest new feature is mounted combat. It also introduced the area of East Rohan and

Chance Thomas, the composer from the previous games, has returned to bring more songs to the world as well.

The official site describes the expansion's lore as follows:

The Fellowship has departed Lothlórien by the river Anduin, continuing the errand of secrecy that began for them in Rivendell. Their hearts are heavy at the loss of Gandalf, their Wizard and guide, but they have resolved to continue on their path, despite the even greater trials that await them.

Meanwhile, the Horse-lords of Rohan look to defend their land against invaders while Théoden, their beloved King, wastes away in the lonely hall of Meduseld. Orcs, Uruks, and Easterlings are running rampant throughout the plains and the Riddermark needs heroes. Discover the fate of the Fellowship and lend your sword to the Rohirrim as you defend this noble kingdom before all is lost.

The Breaking of the FellowshipEdit

Frodo was warned, the power of the One Ring is all-consuming, and even friends can succumb to its temptation. Take part first-hand in the iconic moments that lead to the breaking of the Fellowship through new session-play experiences. Witness Frodo Baggins wrestle with the decision of which path to take on his way to Mordor. Experience the fall of Boromir, son of Gondor, and his ultimate redemption as the Fellowship is split in three, and irreversibly swept toward their own destinies.

Take up arms alongside the lords of Rohan as they seek to defend their lands in three new Books of LOTRO's Epic Story. Ride in pursuit of Uruks and Orcs that are terrorizing townships and travelers, rebuild & reclaim equipment and supplies for the small outposts and towns throughout the countryside, discover what happened to the Fellowship and stand in service to Éomer, Third Marshal of the Mark, as he seeks to counter the dangers that beset the Riddermark.

The official site describes the warbands as follows:

New to Riders of Rohan, Warbands are elite groups of mounted enemies that roam the plains on foul errands. Those enemies drafted for Warband duty are some of the deadliest riders found on the plains. While their appearance may be rarer in occurrence, they are feared above most as the bands themselves travel in greater numbers and boast great strength.

Unlike other foes, Warbands travel over large distances and can quickly overcome the unwary adventurer. Often times, a Warband will be better dealt with by riding alongside your allies as you charge into battle.

New “open tapping" combat rules also ensure that more than one player can get credit and experience for defeating enemies in mounted combat, even when ungrouped, which encourages cooperation towards common goals.

The cavalry of Mordor are known only to ride black steeds, most of which were stolen from the herds of the Rohirrim.
Wargs are a sentient, demonic breed of wolf, with a howling speech of their own and the ability to comprehend other tongues.
Many of the Easterling tribes are nearly as renowned for their horsemanship as the Rohirrim.
Orcs freely roam the fields of Rohan by edict of Théoden, King of Rohan. In spite of this, many Rohirrim still hunt Orcs on their lands.

White-upon-green flags wave against a clear blue sky. Armoured warriors ride atop horses, their hooves pounding across a great open plain. Anyone familiar with such imagery knows the mastery of Rohirric horsemanship and combat. In The Lord of the Rings Online: Riders of Rohan™, you can master the speed and maneuvering of mounted combat, develop a War-steed to the highest realms of potential, and perfect new class techniques through the use of Rohan-inspired Mounted Disciplines.

Speed plays a primary role in Mounted Combat and players will experience riding across the plains of Rohan faster than ever before. Fury – the primary resource of mounted combat – is generated through swift movement across the battlefield. Higher speeds result in faster Fury generation.

The purpose of Fury is two-fold. First, as your War-steed builds Fury your active attacks become more powerful and generate greater damage with each attack. Second, Fury can be used to augment damage and healing done by some skills.

Purchasing digital downloads of Riders of Rohan offers various awards depending on the edition being purchased. Additionally, each edition comes with a set of pre-purchase bonuses for those who buy the expansion before launch.

Pre-Purchase Bonuses:: Upon reaching level 20, you can customize your Soldier on Landscape with a Rohirrim Appearance

1 of 33
Add photo
Retrieved from "https://lotro.fandom.com/wiki/Riders_of_Rohan?oldid=12478"
Community content is available under CC-BY-SA unless otherwise noted.